Ipanema – the art of being

This post is part of my travelling series – posts inspired whilst in that location, brought about by photos I took…

On the shore of Ipanema, around Post 8 Prefecture, we set down our umbrella and beach chair. We marked our territory with the massive beach towels, and I took out Shinie, Proudie and Lurkie to enjoy the Brazilian sun.

I took a stroll down to the shore. The sand slipped through my toes, tickling the senses to awakening. So soft like feathers and yet so sturdy so that the sun umbrella might stand erect, shielding the blaze from those who do not want to turn into charcoal.
At the wave line, women and children stood in trepidation as the waves rumble don to the sand. Could they withstand this wave and walk further out? Or wait for a ripple in between to splash at each other? 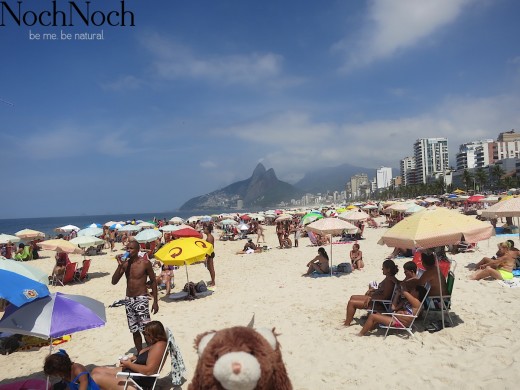 The kids squealed in delight as water drops sprinkle on their agile little bodies, as they jumped in laughter, wanting to beat the waves. There was another squeal but of surprise – the ladies were shocked that the water was cool and icy, and the force of the sea nearly washed off their bikinis from the bulge of silicone from their chests.

Another wave hit, and like the timid ladies I walked back up the sand.

I sipped the coconut, took a photo of Timmie snoring under his book, rearranged Lurkie to become my pillow, and closed my eyes.