I sat in the middle of the room. I could see dainty bits of white powder scattered around me. My arms were limp and numb, as if high voltage had snazzed through my nervous system. My buttocks stuck to the cold tiles like dried up glue; the weight of my corps felt heavier than I had ever known. My legs were sprawled to the side and however much will I had attempted to channel from my mind to my toes, they would not pick up. Perhaps because there was not much will left inside of me.

I glanced around, everyone else was busy with their attempts and stretches. The fluorescent lightening in this dance studio was overbearing, and glared at me like those hospital lights I looked into some 10 years ago when rushed to Emergency Room after a suicide attempt. I wanted to cry then and there. I felt the despair. I could not get up. I could not do the spin on the pole like the teacher had shown us however many times I had tried. I wanted to break down in the middle of pole dance class.

The failure I felt, of course, was not just about dance class. I felt the despair as if every door for Bearapy was ajar but could not fully swing open. I see the opportunities but could not grasp them. I feel the possibilities but they disappear into fog and mist.

It was like pole dancing, something I started picking up this year. Or rather, pole dancing was like the resilience cycle that contained this despair.

Sometimes, I spin too fast and get too dizzy and have to come to an abrupt halt or I would puke. Sometimes, I did not spin enough as I mounted so I end up stationary and stuck in mid air, holding an ugly frog pose until a classmate rescues me from further disgrace with a little push on the shoulder. The teacher yells some instructions to me from the floor, but I cannot distinguish left from right nor front from back when hung upside down on the pole. I feared I would crash land on my head, even though rationally and cognitively I knew there was no way I could fall since my legs were twirled tightly around the pole as fulcrum and counterforce. Nevertheless, I was frigid with fear and confused with which way was up or down as my body continued the inversion, as if it was the most natural thing ever and it was just my brain that could not compute. And so, I could not follow the teacher’s guidance to dismount, and ended up moving in the exact opposite way she had asked me to and got myself twisted. 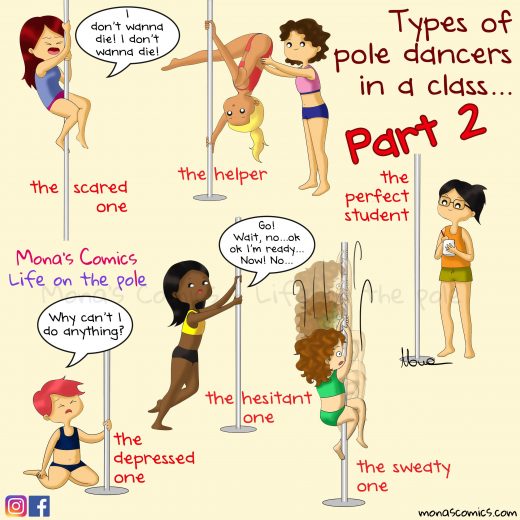 Sometimes, though, I get it. I do the moves, I spin with ease, I even land with some elegance, and feel quite proud about the session – until I review the video and see how hunched my back was, damaging the beauty of myself in my own mind. But, it was good enough, and I knew how to improve the next time.

There are times like this time, when I wanted to give up, because everything I had tried did not get me doing what I intended to do. Utter ineffectiveness. My wrists hurt from carrying my own weight, my core muscles too flabby to hold myself up any longer, and my thighs refused to activate any miniscule trace of muscle strength. In those moments, I wanted to break down and cry. So I let myself go, and slumped on the floor, sitting in my glum and misery.

Then, I breathed, I swallowed back the tears, mostly because I was concerned that the other would feel more embarrassed to see me cry than me crying in public, to which I have no qualms. And, I get back on my feet.

I don’t know what happened in that split moment. I don’t know what it was I thought or felt or processed or remembered. But I got up. I lapped up some powder with my sweaty palms from the floor. I stood in front of the pole. I closed my eyes lightly, and felt the cold steel on my finger tips as I wrapped my hands around the cylinder extension.

And, I got back on that bloody pole. And, I spun.

I grit my teeth and held myself with that last ounce of energy and residual determination in my bones, and I spun as I transitioned between the very moves that I could not do moments ago.

I managed a soft landing. I smiled some. Classmates clapped and cheered. 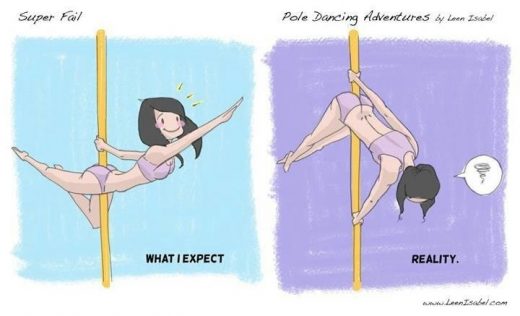 I did it. But inside, I was trembling. I knew I was about to fall apart. I changed back into my clothes quickly, gathered my affairs, and threw them into my duffle bag. I strode out of the studio and into the cutting cold of Beijing’s winter.

I dared not look up at anyone as I half ran towards my bicycle, because tears started to drench my fast mask. I cried all the way home, sight blurry, and almost crashed into the delivery guys whizzing around in their scooters. I got home in one piece, tried not to yell at the kids for not being in bed already, gave them hugs as they ran towards me in such delight to see me and such a legitimate excuse to delay bedtime. I shuffled them back into their bedrooms and got them to agree to stay in bed. I went to my hot shower, where I could really cry and no one would know nor hear, for how can one tell whether it was tears or simply, shampoo water running down? I saw the puffy eyes in the mirror as I got dressed. But then I smiled. I did it tonight. I would do it again.

9pm. Ready for a Zoom call with the UK on bringing workplace mental health synergies across the seas…