I am obsessed with this watch. Bewitched by it. I long to feel the platinum on my wrist, caress the cage’s surface, and stare at the dark emerald green until I am lost.

Yesterday, I went for a haircut, to fix a horrible haircut I had last week. I had not flipped through any fashion magazines for a while so I asked for a few. I flipped and flipped with no aim. Pictures and photos streamed by. Then a picture of this watch, tucked away amongst other items, seduced me.

My heart stopped beating and my breath stilled. I was mesmerised in its allure.

I noted down the name and brand to look up when I got home. But I could not wait. I started searching on my phone, and the hairdresser had to keep tilting my head back into position. I have not heard of this brand before. Why would I? It is not my world. I know a realm of luxury and wealth exists beyond my grasp. All afternoon and evening yesterday, I read up on the watch, and all the press releases and articles about the Horlogerie — a Maison that employs only 60 people and makes about 1,500 watches per annum. They are very rare indeed. 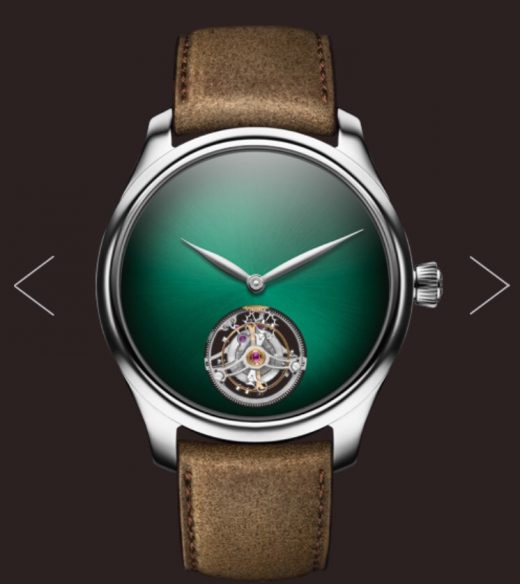 A fortnight ago, I spoke on a panel and gave answers that might not have satisfied the crowd. I do not remember exactly what I said, but somewhere along the lines of persuading them to head down the rabbit hole to have tea with the Mad Hatter before deciding that they would not like it, an introspection of sorts.

Yesterday, I told a friend of mine how I was obsessed with the watch. She said that the rabbit that was running towards the Mad Hatter had a pocket watch. This morning, I woke up with the image of the watch filling up my mind, imagining the fluidity of mergence if it was on my skin. Another friend had left a message on my Facebook about the watch.

It was a Tourbillon, he said. The Tourbillon used to be put into pocket watches to offset earth’s gravitation. The effect does not work in a wristwatch.

A few weeks ago, I was at a breaking point where I resented and questioned every single society constraint that I had adopted as a construct and norm and boundary for my life. I wanted to free myself. That freedom would be a sense of no gravity, a vast expanse, and floating. And that space would be a dark emerald green, not black, but green. The same green on that watch.

I have not worn a watch for 15 years or so, except if I needed it for work in the recent few years, when I would wear a cheap plastic one and take it off as soon as I can for it is a burdensome weight on my hand and gets entangled with my bracelets. I am also not one who pines for luxury goods. While my girlfriends yelp at limited editions Hermés bags, I am fully amused by a furry panda bag I picked up for a few dollars on the street. I have seen gems and jewellery and lavender jade earrings that I had liked or found pleasing to my eye, especially during my GIA certification process. But nothing, nothing would spark my interest like this watch has.

This one is exquisite. A rareness beyond what my vulgar words can describe. The watch is called the Endeavour Tourbillon.

I want it. I want it on my wrist so I can watch the dial fly and admire it every second. I want it so much I can feel it in my body. Just once, to hold it in my hands, just once.

I need it. Not the watch itself, but a Tourbillon so I can endeavour to offset my own gravity that holds me hostage. Maybe this is why the watch has captured my attention like the devil has Eve.

Five years ago, I would have been able to buy this watch comfortably and still feel secure enough in my bank account. An absolute unnecessary luxury of course, apart from possessing it, there is no point. But, I could have afforded it. Today, it would bankrupt me. I resent my loss in purchasing power. Meaning in my work does not make up for the resentment. What meaning does any of my work have anyways? Meaning is concocted. In the long run, we would all be dead and no one would care.

The only thing I would change would be the the colour of the watch’s band – a deep, regal purple would be more fitting for me. How is it they have no retailers in Beijing? I would have to go see it in Singapore when I am there next.

My hair is still barely tolerable. I resent myself for not paying attention in the first instance, trying to order groceries and gloves for the kids on my phone whilst the hairdresser chipped away as she pleased. I used her because she was cheaper. Never again would I sacrifice my hair just to save a few dollars, dollars that would not buy me respect, meaning, connection, kept promises, or the watch. So, why bother?

Am I the rabbit with a pocket watch who is frantic about being late, the Mad Hatter, or the Queen of Hearts shrieking “Off with their heads”? Or the Cheshire cat perhaps?

This is not a dream. This is my reality. A reality I need to kill.