This last week I have been thinking about going on a solo trip.

I have trouble, though, thinking of anywhere I want to visit.

I don’t think I want to visit anywhere. Rather, I just want to get away and hide. Then, to think about the practicalities of flights, hotels, food, I stared at my bank account and reminded myself that it would not be possible to do so.

Going away on a trip, being on my own, and spending some time away at first glance seems like a reasonable aspiration. After all, people say we need to travel to see the world, have a holiday of sorts. I have always loved travelling. I have travelled to plenty of places. I have also heard people say travelling solo is a great thing to do because it allows us to be free and go wherever and do whatever at our hearts’ desires. However, this sense of wanting to travel somewhere on my own is not so filled with fun.

It is of dread.

The last time I had this same feeling of wanting to go travelling on my own out of dread was 10 years ago. Strange, it was about this same time, or perhaps slightly earlier in the summer a decade ago.

On a Tuesday or Wednesday of the week then, I decided I needed a break and would go on a weekend trip to Qingdao on my own. I was not so conscious of how I felt then. In my mind, I thought I was exhausted from the move to Beijing and just needed a weekend away to rejuvenate. The beach and the ocean might be good for me, I had thought, and Qingdao was close enough to Beijing.

I got home that day and announced it to Timmie that I was going away on my own for a weekend. The next day I decided maybe he and I should go together. I booked tickets. I am never this spontaneous. Timmie told me years afterwards that he had called a crisis hotline because he thought I was wanting to do something special before I took my own life or did something drastic.

Before that time 10 years ago, another time I remember going off on my own was in 2007 when I was living in Tokyo. I decided overnight I would spend a week in Kyoto because I had been flat out after the Financial Crisis. My boss was so thoughtful he approved my leave immediately. I zombie through all the temples on that trip, not knowing where to hide. I would not be surprised if I was mildly depressed then but just did not know. 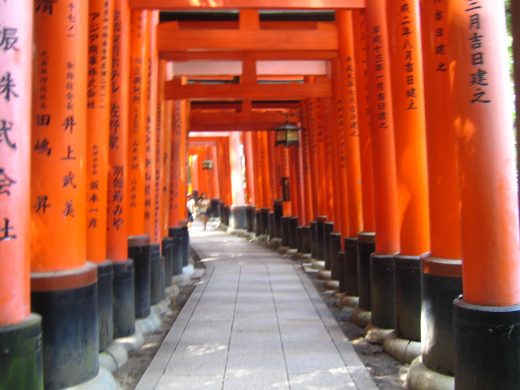 Since the Qingdao trip, I have not had the same intense want to go somewhere on my own – until a week ago.

Flying solo sounds romantic: meander through the cobbled streets of Santorini, spend a day sipping coffee on the sidewalks of the Gold Coast, see polar bears in Canada, or stare up into a sky filled with the majesty of the Aurora Borealis. I also want to meet Santa Claus and be an elf for a day. One would be free, free from having to cater to requests of travel companions, free from time constraints. Free. A vast space of possibilities and serenades. Picturesque. A dream.

The wise say that it is all a journey, a journey of becoming. I can see it. I can see what I am doing and thinking and what it all means and how I need to stop that. But I am tired of this journey. So, to be once and for all free, why bother with travelling and add to my carbon footprint? Why not the ultimate liberation and be free from myself and my own breath?

I re-read my last blog post. I was mistaken. The eulogy that painted me in a glorious light would most likely be fake. It was not people having mercy on me; it was them needing to feel like they are merciful people. Most would probably think the former, of how I did not tow the line and dashed their hopes to the ground. Yet, despite thinking that, no one would dare say it as it was, because they would assume that a eulogy must be something pleasant about the dead person, and to say anything different might make them stand out for the wrong reason – who would want to be seen as ungrateful or critical of a dead person? So, like everything else in the world, they would keep their thoughts to themselves, hang their heads low, even nod in unison, smile, comfort each other, agree how significant my appearance in their lives had been when they really could not be bothered, and then blend in with the crowd.

Love may heal wounds, but to think love is only all good is too benevolent and naïve of us. Love can also kill spirits and destroy our souls, leaving us with not even a shell but only fragments of of nothingness.

I really should be a poet.

Why am I even writing this?

Where shall I go? My friend suggested I could open Google Maps and point to a place to travel to on my own. But Google Maps would not load even with the VPN on…