By now you would know that I think people are stupid, clicking “like” as if one had really understood the message and therefore made an opinion about the video they had watched, whereas rather, they were possibly liking it because their friends liked it and shared it on their social media pages. Because, if you really watch and listen to what is being said on the videos, you would see that the content does not actually say much we do not already know.

Or that we could “like” it because it was someone in the video we do not know, versus a friend who had said it, because then that would make us look foolish in the company of this wise friend, but it was okay to “like” a stranger hailed to have expert status.

Recently, I found someone who agreed with me — BE STUPID!!

“Be Stupid. The etymological meaning of “stupid” is ‘to stupefy and being stupefied’; that is, having the courage to see things for how they could be, and not for how people commonly see them.”

In other words, stop being the sheep following the wisdom of the crowd. Though the cost of such could be death, literally or figuratively, we do not seem to like people who stand out too much regardless of cultures, ages, gender and history . Unfortunately, I cannot remember where I read it except that it was on the back of a book cover, and so I cannot give the author credit. But if someone finds out where, please let me know so I can reference him. 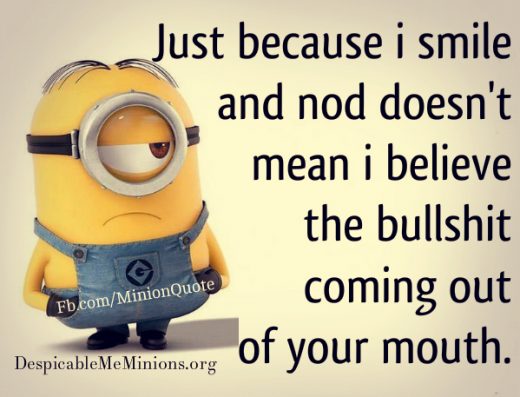 There is a cost for the one who speaks out first, social ostracization maybe.

There is a sacrifice for the one who offers alternative hypotheses, burnt at stake perhaps.

Don’t be stupid because you do not have the courage to speak out.

Be stupid instead, with a conscious curiosity for what else could be there.

Nothing particularly wrong with adhering to the popular trends, but a caution that popularity breeds mediocrity. And in this day and age of Dataism (a term Harari used in his book, Homo Deus) the cost of NOT being stupid, of NOT questioning the common thought and mode of behaviour, is extinction of our souls.

Let us all be stupid.