anger is good for you

Most people consider anger a negative emotion. I won’t argue. But I had always held a silent, obstinate belief, that anger is good for me, and for everyone. It’s how we use the anger. However, whenever I tried to argue my case, I could not convince the skeptics.

Chance was when a friend, who knew I wanted to explore my creativity in depth, recommended I read the book, The Artist Way, by Julia Cameron. The book is about how we can (re)discover our creativity and nurture our artistic attempts. In one chapter, she talks about anger.

In the worst days of depression, I would get very angry. No, not angry, but livid, berserk, and vehement. I would be in a rage, a fury, and explode. I would throw a tantrum and kick Timmie’s shoes out the door, hurl glasses into the windows, and push the TV over.
I got so angry that I was angry at myself for being angry. I didn’t know why. In the end, I would be exhausted and break down crying. Working with my shrink, he asked me to decipher my anger:

Et cetera, et cetera… Eventually, I discovered that I was not angry. Instead, I was feeling unimportant and abandoned. To solve the issue between Timmie & I we had to address the actions and decisions surrounding the feelings of inferiority. Anger was only the surface.

I feel like I am cheating by retyping what someone else had written, but this was too inspiring to not share. I hope Julia can convince you better than I did, that anger is good for you.

Here are what I consider the best paragraphs on anger excerpted from her book.

Anger is fuel. We feel it and we want to do something. Hit someone, break something, throw a fit, smash a fist into the wall, tell those bastards. But we are nice people, and what we do with our anger is stuff it, deny it, bury it, block it, hide it, lie about it, medicate it, muffle it, ignore it. We do everything but listen to it.

Why? Because anger is a map. Anger shows what our boundaries are. Anger shows us where we want to go. It lets us see where we’ve been and lets us know when we haven’t liked it. Anger points the way, not just the finger. In the recovery of a blocked artist, anger is a sign of health.

“Blast him! I could make a better film than that!” (This anger says: you want to make movies. You need to learn how.)

“I can’t believe it! I had this idea for a play three years ago, and she’s gone and written it.” (This anger says: stop procrastinating. Ideas don’t get opening nights. Finished plays do. Start writing)

It could be frustration, hopelessness, sadness, discouragement, disappointment, and loneliness. Anger overpowers and overshadows these emotions and we lose sight of why we are angry. We know only to suppress the anger.

Anger is the firestorm that signals the death of our old life. Anger is the fuel that propels us into our new one. Anger is a tool, not a master. Anger is meant to be tapped into and drawn upon. Used properly, anger is use-full.

But take anger as a signal, a guide, a direction, and use that motivation to catalyse the change we have been dying to make in our lives.

Anger is not the action itself. It is action’s invitation.

What is behind your anger?

Every time we feel angry, we must ask ourselves: why? What is the emotion we feel under the anger?

Spend some time to dissect your anger, and you might be surprised at what you might find out about yourself…

But before that, in response to popular demand and requests, check out the pair of Angry Birds shoes I wore for my first dance on the wedding day! Haha! 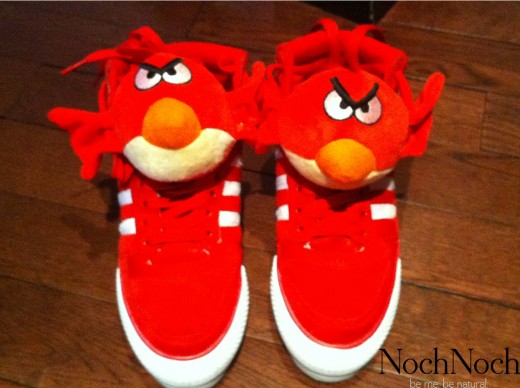