if she had my opportunities – the girl effect campaign

Some time ago I visited a rural school on the outskirts of Beijing, China. It was more of a community centre, for children of migrant workers in Beijing. I had just attempted suicide perhaps a week prior to that excursion, and being with these children and adolescent girls made me re-evaluate my condition of major depression – if only these girls had the opportunities I did, they would not have to be in such destitute environment, so what was I so upset about in my life?

This trip was a project the Rotary Club of Beijing funded, to donate books and library equipment through The Library Project to the schools children of migrant workers attend. Many people move from rural areas of children to the relatively more developed cities of China to look for work as domestic helpers, drivers, construction workers etc.

Xinhua agency estimates some 230 million migrant workers around China – almost 2/3 of the US population – and some 5 million are in Beijing. Assuming half of the 5 million in Beijing have children and another half of that are girls, there is still a staggering 1million or so girls who don’t necessarily have access to education, bearing in mind that this is only in Beijing and does not take into account other cities that take in migrant workers.

These young girls at the community centre did not have a stable school – the government could close it down at any time since there was no licence for the school, and indeed this wipe out has started in Beijing recently. They had no books, no paper, and no proper qualified teachers except a few well-intentioned volunteers.

I nearly burst out in tears on the spot as we were assembling books funded by the Rotary Club of Beijing. Partly it was sympathy for these young girls, ranging from kindergarten age to adolescents, but partly it was some sort of shameful feeling for myself.

Not particularly wealthy, I nevertheless was fortunate and had opportunities for education and other necessities growing up in Hong Kong and Australia. I was taught to stand up for myself and that women could be successful too. I joined a multinational corporation as an executive straight out of university and started my life as an international executive. I can choose who to love and who to be friends with. I knew how to protect myself from diseases and AIDS. I had a roof above my head and I savoured fine wine and food.

So why was I still depressed? What was missing in my life? 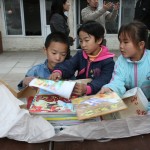 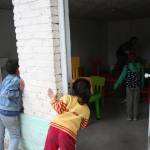 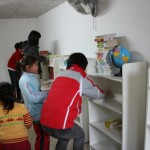 These young girls running around me, laughing and giggling at the new books they cradled in their hands were so content to just to be able to have a school to go to, or perhaps someone to talk to and take care of them. They have nothing I had growing up, and yet they were so bubbling with joy.

How was that possible? They would probably give anything for the experience I’ve had in the last 30 years, and yet I was lamenting it.

And to think that these girls were probably the luckier ones with a community center to go to was all the more heart aching. When I was in university, I had the opportunity to do extensive research for an international moot court competition. During that year, I read so much statistics about women and young girls who were trafficked around the world for the purpose of prostitution and slavery. The statistics are staggering, and I cringe every time I read related articles.

As I sat shuffling the books on to the book shelves and trying to engage in conversation with a few other volunteers there on the same day, even though I was completely deflated, I said to myself, when I am ready to work again one day, women empowerment is what I want to be doing, be it for charity or at government level. I don’t know what actually is this new career step is yet, and I don’t know how these little girls who were running around me turned out. The least I can do now with minimal energy is keep doing the charity work that I can and helping as many of them as possible. 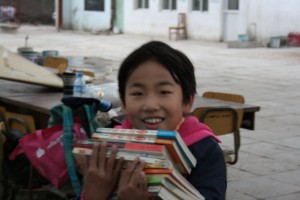 And through this post, it’s a short reminder to myself and everyone that, yes, while we can make improvements in our lives and its important to confront our past, we should also count our blessings. I am not saying we should discount our own challenges, but sometimes we need to take a step back and look at the big picture and the rest of the world outside our little comfortable bubble.

For every bad day you have, remember there is one little girl out there somewhere, who doesn’t have a book to read, no medical help, forced into slavery and choices she never knew she had the freedom to make.

So for now, let’s put down our own depression, and spread the word about The Girl Effect campaign, aimed at helping these young women becoming more than a commodity. Here are other thoughts about the same topic as well if you are interested.

Today, I can muster up some more energy, and send that extra email to help out at the charity organizations so perhaps, one more little girl can escape her fate of doom.

What can YOU do to help?

This post is written as part of the Girl Effect Campaign.