the partner in this whole ordeal

Everyone has a different situation, and those of us who have the blessing to have someone stand by us while we are depressed, be thankful, be grateful and feel the love for you. Yet, if a depressed person has a hard time, perhaps the partner next to him or her has an even more challenging time. I was lucky to have my boyfriend with me whilst I banged my head on the walls or cried for hours. And maybe for other partners and friends of depressed people out there, this might serve as an encouragement to stick through it till the end.

So, a little interview with my boyfriend, who took care of me in my depression and sickness on how he felt during that period and how he coped:

At the beginning I knew something was wrong, but just thought it was stress or culture shock. At the time I just wanted to find a solution and was happy for Noch to stop going to work etc. I felt frustrated because I couldn’t make her better, and any logic I tried to use when speaking with her seemed to fall on deaf ears.

What was your reaction when Noch diagnosed with depression?

I think I was relieved, because once diagnosed I felt we could start to treat the illness properly. I didn’t have any problems with her having depression, for me it was just a sickness like having the flu. I even joked with her that all celebrities etc. have depression and need therapy and it quite trendy to be depressed.

What was the effect on your daily life?

The effect on my daily life was the biggest impact and was a challenge to deal with. Noch would burst into tears and have severe mood swings which I didn’t know how to deal with. I tried to say the right things, but it hardly ever helped. Then I would get frustrated and sometimes lose my temper and become angry. I’m a positive person and the worst part of all for me was that Noch would bring my mood down. I would get up and be excited about the day, but she just wanted to die, this was very hard for me to reconcile.

The migraines and associated physical illnesses also made it difficult for me. Sometimes I would have to leave work or a party and rush home to take care of her. One time I came home and found her semi conscious and the bottom of the staircase. I didn’t know if she had fallen or hit her head or what happened, so I had to carry her to a taxi and go to the hospital. The other hardest thing for me to do was to put Noch’s needs first. So even if I was at an amazing party having the time of my life, if Noch called and needed me I had to leave immediately without even saying goodbye to my friends. This took a bit of time to get used to without feeling resentful, but once accustomed to it I felt a sense of responsibility Id never felt before and it helped me grow up

How did you feel?

Overall I just felt frustrated. There really wasnt anything I said that helped the situation. I just had to be there. When the therapist first said Noch would need a year of treatment I thought that was way too long and an exaggeration. In the end it did take a year.

How did you cope?

Eventually I learnt to manage the situations as best as possible. So even if we had to rush to the hospital, I may take a few extra minutes at home to pack myself a few books or change into comfortable clothes. This made it easier for me to deal with the long stays in hospital. I learnt to watch for signs that a migraine was coming and take steps to avoid the triggers, and pack medicine and water all of the time. Also I learnt what treatments I could offer her. When she was crying and wanted to die and couldn’t sleep it was useless for me to tell her that everything would be OK and that life was worth living. She just couldn’t see my point. Instead I learnt to distract her with fairy tales and stories I would make up. I would sing her to sleep with nursery rhymes and relax her with massages.

Did you want to give up? Why did or didnt you?

When Noch and I were on totally different wavelengths and she was bringing me down and I felt resentful I wanted to give up. I think i kept just saying to myself ‘lets give it one more month and see how she is” and I managed to get through. I was confident that it was a temporary situation. I had known Noch for 1.5 years prior to the depression and she was such an amazing person, I knew that with time she could get back to that point. I also felt like the depression would make her stronger and be a change agent in her life and so maybe was a necessary evil.

We lived together and had just moved countries together and were therefore in a committed relationship. So this helped too as I was committed to taking care of her no matter what. I think if it had been a less serious relationship I may not have been able to stick through it.

What advice would you give to other poeple whose partners have depression?

This is a tough question and it depends on the type of relationship and the stage of the depression.

Firstly you need to seek medical advice and treatment through medication and therapy. Be prepared to be taking medication and therapy for at least a year. We were very lucky in the fact that our insurance covered the medical bills and after trying a few therapists we found a very good one. I advise doing single (for each partner) and couple therapy and dont settle for a therapist who you are not comfortable with!

Dealing with depressed people takes a lot of energy and comitment, you need to be prepared to put that person first and be in it for the long term, ie. you need to be in love. Love will get you though!

My tribute to all the partners out there taking care of a depressed other half, without you all, we would have been long gone. It’s even harder for you I must imagine, taking care of someone else, but you too, are not alone in this struggle. Talk to us and my boyfriend if needed… 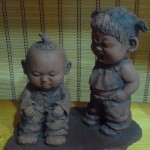