the disappointment sweater underneath

During conversation with a good friend today, I was reminded of a very powerful scene on the DVD recording, The Shadow Effect. As I watched the little girl put on layers and layers of sweaters, I resonated with alarmingly shock at the realization of what I had hidden all these years inside me, which explained a lot why I am the way I am, or was, ever since I came to my independent senses as a “young adult”.

The concept, The Shadow Effect, was introduced to me by a friend, Dr Karl Jacobs, when I was under his care for about 2 weeks in my recovery process. t is about making peace with yourself and others, a self-discovery path introduced by Debbie Ford. The theory goes that everyone has a “shadow” within them, something we do not want others to know about, or some hurt or trauma we have suppressed within us that holds us back from being who we really are. Thus, we need to dig deep and find out what is it so we can let it all go and reconnect with our inner selves. Whether you subscribe to that theory or not, hear me out. 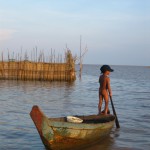 One scene starts with 2 children stand in front of the mirror in a dressing room. For some reason the little girl “spoke” to me in a much more powerful way and I only focused on watching her. She had a sweater on her, with the word “loser” printed right across her chess. She is outcasted and ignored by her peers, and her parents are not proud of her. She is sad and frustrated. She must be some 6 or 7 years old. Slowly she learnt that however, there are some behaviors and actions which would gain her the recognition and praise she crave. So on top of her “loser” sweater, she pulled over another sweater, this time marked “outgoing”, and then another one marked “socialable” and then more and more sweaters on herself with all these positive qualities marked on them. (I am not sure if I remember those sweater labels properly, but you get the idea).

After she was suffocating with all these sweaters layer over layer, she walked out from the dressing room and on to front stage, to cheering and thundering applause from the audience. She bows, she curtesys, she takes a little skip and twirls a little dance. She has a brave and confident front. She is happy. She is enveloped in praise and positive feedback. She feels good.

Yet, the “loser” sweater is still on. She is still wearing it underneath all these layers of gloss and glamour. But it is too far down and so well covered up by other sweaters no one notices. I think she forgets about it herself after enough time.

It suddenly all came to light for me. I had to pause the DVD recording right there and then because it all flooded back to me. I couldn’t stop tears pouring out, as all the hurt and humiliation I felt some 20 years ago became so real again.

My hidden sweater was “disappointment”.

Do not get me wrong, my education and upbringing has been supportive and my parents and teachers were all very encouraging, and gave me lots of opportunities to learn, broaden my horizons and try different things. Perhaps however, they also had high expectations of me because of my “potential”, as they always say, and also of the nurturing I received. The belief was, to maximize any potential I had. Take for example, if my potential allowed me to get 99/100 on a test, then getting anything lower was not fulfilling my capacity and I should not be satisfied or proud of myself, even if my score was 95/100.

Unfortunately, I was not a straight A student. I have never been and I don’t think I ever will be. My strengths are not with regurgitating facts I learnt in class and filling in blanks in a test or multiple choice questions in public exams. I am more the person who can do well on mid-term essays, those which allow me weeks to research and write and add in my own opinions. So obviously I did not fare too well in the HK education system, where despite my schools’ efforts to expand our analytical and independent thinking skills, could not escape the traditional public examination formats. And so from kindergarten onwards, I had been a “disappointment” to my teachers and parents, falling short of a few marks to get the perfect score.

It is strange what the mind tend to hold on to. To this day I can still see a vivid image: a cute 4-year-old me, walking out of kindergarten after a mental math test, so bubbly and excited because I thought I had gotten every question right, only to find out after telling my mum, that I mixed up – again – where the short hand should go on a clock’s face at half past,. Oh, no 10/10 again. “Why are you so careless? That’s disappointing” rung in my little kiddy head.

Primary school was no better with more and more tests. I never failed a test, mind you, and looking back I think my scores ranged around a A- on average. So it’s not so bad, is it? But then why was I told I was “good for nothing” and a “disappointment” each time I came home with a A- or B+ instead of the A+? What was I missing? I didn’t understand. I tried really hard each time and checked my answers again and again, and during the test I found nothing wrong with it. I studied hard. I was very conscientious as a student was always the feedback I got in end of year reports, but I can still do more given my “potential”. I remember being so angry and upset with myself, and at my mother for yelling at me about my “low scores”. I was filled with resentment and bitterness as I curled up my fingers into a fist, trying to sob up tears, and wrote that entry in my diary “one day I will show you all, I will be a successful lawyer, banker, doctor, whatever, but I will show you all.”

I was 11 years old then, and I felt like I was letting the whole world down.

High school seemed to improve in some ways, as I got recognized for certain aspects of achievements. Yet my academic scores broke record to a new low: 4/100 on a calculus test. Empty answer sheet on a physics test. I tried really, in all honesty. But I just couldn’t grasp those abstract concepts and squiggly numbers. It had no application to my life. Do I care that two little trolleys hitting each other and then bouncing back was momentum, or what the Elements table was? I had no interest in it. Yet I tried, and studied those subjects because they were “good for me” and the “right decision” – yes, but for who? My teachers tried to give me extra lessons but still I was “disappointing”. I crashed my first public examinations on the HK Certificate Levels: D, D, D, E for physics, chemistry, biology, and calculus. My only A was for English. The A-levels improved drastically, as I finally studied what I wanted to. But still no straight As. University I got into a so-called prestigious double-degree program in Hong Kong, but it was no Ivy League or Oxbridge – again very disappointing. To who, and why, I still don’t know. After all, I didn’t really decide I had potential, everyone else did that for me.

All throughout, I worked extra hard. I not only had to do my best in academics, but in sports, in debate, in everything I was involved in. I trained as much as I could, until my arms and legs were twittering with fatigue and muscle pains. I hammered out my speech alphabet by alphabet and practiced so many times to make sure I was going to “nail it”. I became competitive. I had compared myself with everyone. I had to be the first. I wanted to be the first. I wanted to show them, show everyone, I could do it. I could reach my potential, the potential that everyone thought I had but I never saw for myself. The bronze trophies and medals were not enough. I wanted gold. I became the ultimate person I was accountable to, and I started having irrationally high expectations of myself. And then the only person I disappointed was myself.

Little did I know, I had buried this “disappointment” sweater underneath as I broke through the dependence on parents and teachers, and started to really think for myself, and make my own decisions about classes to take in university, exchange year in Paris, and what job to do as a career. I learnt what it was that would be accepted. I started to build an image for myself – not a fake one – but one that I would like to present to people that contained only certain bits of me. The friendly, sociable, confident me. The one who over delivers on promises, quickly and responsively. The responsible one. The person who can do everything at the same time and have so much on my plate, AND still do well in all of them. I lapped up the praise people had for me. I basked in my self-indulgent glory as I win best debater after best debater. I gloated when I got a posting I wanted plus a promotion. I put on the “positive” sweaters like that little girl had, and walked out on stage, triumphant and proud, flourishing in the applause.

I was no longer, a disappointment.

Yet, when the whole world thinks I “have it together” I still felt really insecure inside.I spent my energy defending that image I would like to portray. I had to make sure that the good bits, the calm, collected and cool me showed. It was tiring. My  self-confidence was built upon the fear of disappointing people. It is not a solid foundation.

What is your hidden fear? What sweaters are you hiding underneath? Dig it out. Or you can never deal with it. Without confronting your hidden fear you will not be able to let go, and reconnect with your inner self, and the real you.

It sucks. And it hurts, I can tell you. I’m crying as I’m writing this because it is painful to dredge out the past. So at least, you are not alone.