i hated my own reflection

So eventually I accepted that I was depressed. But simply knowing and realizing that I was depressed didn’t help much. In fact, dropping the pin cracked open the Pandora Box. Floods of despair, questions, doubts, memories, feelings of guilt swarmed my fragile mind and body. It was too much to bear. And so, on top of the migraines and pain in the head, I started to hate looking at myself in the mirror.

I don’t know if you have been in severe depression before – and I don’t mean those few days you feel like moping around and not seeing anyone – but it doesn’t feel good, especially when it lasted several months. Perhaps not even delving into how I was feeling and what I was thinking, just my actions – or rather non-actions, made me feel so desperate and miserable.

There were days when I didn’t want to wake up. I would literally be in bed for 20 odd hours, just getting up for the loo and maybe some water. I slept until I was tired from sleeping, and so I slept even more, like I was in a trance or coma. I forbid Timmie to draw open the curtains in the morning. The room was kept dark. When I did venture out of my bedroom, I got the mattress out from the guest room and had it placed on the living room carpet, and there I parasited for another few days, crouched up inside my blankets with Floppie. 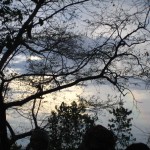 I stopped caring how I look outwardly. I couldn’t be bothered to comb my hair or put on my assortment of face creams, eye creams, cuticle oils as I used to. I only went out to see my psychologist and I would pull my hair up into a half-hearted pony-tail, throw on a ragged t-shirt and jeans skirt, shuffle into my Ugg boots (because it was freaking freezing cold during winter) and swaddle off.

I didn’t dare check how I look in the mirror anymore because the sight scared me. I was green and pale. My eyes were hollow and empty. Other times they were swollen from all the excessive crying I was doing. It was uncontrollable at times and I’d just cry and cry and cry until I got tired and fell asleep. The dark circles under my eyes were literally black. My cheeks were gone because I had lost so much weight from throwing up all the time because of the pain in my head, and also from lost of appetite due to the depression. I wasn’t eating until food was stuffed into my mouth. I had no sense of taste. Everything was bland. Even Indian or Thai takeaways, my favorites, could not entice me. At one point I believe I was 10kgs below my normal weight.

Nothing sparked my interest, not even the DVDs I had bought previously which I had wanted to watch when I had time. I had the time then, as the doctor made me stay home and not go to work. But I didn’t want to do anything. Partly I also couldn’t watch TV because it made me dizzy and nauseous, and then my head would start hurting too. Nor could I read.

I would also get these nightmares every night, and wake up some 3-5 times every few hours, screaming and kicking. After my sleepy spells, I flipped to the other extreme and had insomnia. I couldn’t fall asleep until 4 or 5am everyday. The doctors had to start prescribing sleeping pills.

I hated my own reflection, and wanted to be rid of myself. I sprawled out on the sofa, carpet, bed, mattress, waiting to rot.

As the psychological theories go, your actions are induced by your feelings, which are in turned stimulated by thoughts. Oh there were lots of thoughts running around in my head. Partly negative, mostly questions, and a large part historical events in my life. But perhaps these last 600 words have been a bit heavy, let’s save the dark thoughts for another post.