everyone needs a cool shrink

In the end I was practically forced by my GP and Tim to see another psychologist to treat my “stress” (I still hadn’t accepted I was stressed yet). He was from Jamaica, and I remember when I walked into the consultation room the first time, I was nearly blinded by the green shirt and tie he had on, and I mean BRIGHT lime green. And I thought – wow, he’s cool, I like him already. We can talk.

Dr. Stephen-Claude Hyatt saved my life – literally, because I had tried to end it a few times. He guided me out of my depression. He assured me it was ok to be sick, and if being sick meant weak, then it’s also ok to be weak. He changed the bulbs so I can look at myself in a completely different light. He pointed me to unearth what was within me already. He put a stop to my self-doubting and self-questioning, feelings of guilt and despair. He said he didn’t cure me – I cured myself, because it was all in the mind. Yet, without his coaching and guidance, coaxing, sometimes outright stern scolding, it would have been so much more difficult to get my act back together. 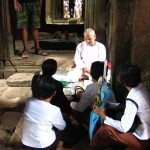 In the past, I was very against the idea of seeing a psychologist. I thought it was for the “crazy” people. I attributed a negative stigma against it. Perhaps it was the society’s views and how people talked about mental health, but mainly it was my own bias. I have a uncle who is delusional and was sent to mental institution instead of prison after he committed a crime. I have another uncle who’s pretty violent physically and couldn’t control his anger (but he did love me a lot and was very good to me especially when I was young). In high school I did community service and took care of children with Down’s syndrome. I thought these people were what is meant by “mentally ill” – not me.

There are many forms of mental illness, depression being one of them, and if left untreated can worsen in delusions and other problems. And after going through this experience, I think everyone should talk to a psychologist or counsellor regularly. It is a pity that not all multinational corporations sponsor this or include this in the medical insurance. We need more awareness and a change in attitude so that people are not so reluctant to seek help when they are mentally ill – and not to think being mentally ill makes us necessarily a monster. Easier said than done of course. Took little me some 29 years…. But on my part, the little I can do, is to now speak openly of my experience and not be ashamed to tell people I see a psychologist. Even if they do think I’m “crazy” and look at me negatively as a result – well, that’s their problem. Plus, who said I’m not a little bit crazy anyways? 🙂

Actually, I think it’s pretty funky to have a psychologist, especially one like mine. It’s not so scary, we always have a good laugh (when I could start laughing again). I was quite sad when he told me I’m ready to soar again on my own and I didn’t have to go back to see him regularly. But I know if I ever need his help again, or even just to set my head straight on my shoulders, he will be there.

Everyone needs a cool shrink!!