And so after 19 June 2009, the migraines kept coming back – and I kept ignoring them. I thought willpower was stronger than the body, and so all I had to do was to will the pain away and carry on with my normal life. And with each day that passed I did not address the problems, I was actually destroying myself, little by little.

I went to see a doctor after the weekend episode of course, just to make sure. She explained that there were many triggers of migraines: the heat of the sizzling Beijing summer, the relocation, the air, diet, and stress perhaps? She gave me some stronger painkillers than panadol and told me to go see her again in a week. I even googled “migraines” to learn more about it. Seemed easy enough to get rid of.

But I didn’t have time to see my doctor again so soon. I had work to do in the office, clients to meet, business trips to Shanghai, had to meet new people, start a new social life in Beijing. The migraines kept coming, and I kept dismissing and ignoring them. Yes I’d wake up with a headache but still I stubbornly turned on my blackberry at 6:30am in the morning as the driver took me to the office. I would waffle down some sort of breakfast from Starbucks downstairs, pop a painkiller, and start working, planning the meetings for the day. I had to write up a draft of our new strategy, or read a credit proposal. It was all very “important”.

Lunches I ate with my colleagues usually, or sometimes I’d grab a sandwich at Starbucks on my own to chill if I was not with a client. Then I’d go back to the office and type away again. The sun came in behind me around 2pm everyday – perhaps it was the heat that made my head hurt I thought, because everyday around 3pm my head would start to ache. It would be so good if I could go home early or take a nap, oh but wait, I have that conference call with HK at 5pm, and then London at 6pm. Well, I reminded myself, be grateful that there are yet no calls with the US at 10pm at night like in Tokyo. Plus, I’m not working 24/7 like some investment bankers I know, or even like my younger sister, so I told myself to be grateful and finish what I had to do.

By the time I got home around 8pm, my head was pounding and I felt very nauseous. How many times have I actually thrown up in the toilet at work? Lost count. It felt better after throwing up actually, so I continued to work. No one can know this. I’m all right. My bosses from HK and Singapore called me to check whether I’ve settled into Beijing and the new job – yes it’s taking some time to find the apartment, and yes it’s very hot. But I’m all right. I’m getting down to the job and getting on with it. I will provide results as they would like. The headaches? Oh just a phase I’m sure. 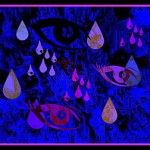 June, July came and went, and I was too busy to see my doctor again until I ran out of painkillers. Because my pain hadn’t subsided and as one bit of the pain was localized, she wanted me to see a neurologist and also do a MRI.  I reluctantly agreed to after stalling a bit more. The office was so far away from the hospital, and the traffic so troublesome, and I have meetings and all that. No time for all these funny medical machines.

Of course my boss in Beijing and some colleagues knew about the pain – they had to if I was disappearing in the afternoons to the hospital. They were very concerned and introduced me to different doctors. But I thanked them and played it down. It was nothing. Just settling into Beijing. It’ll go away soon, don’t worry about me. I didn’t want to see so many doctors. I hardly ever went to the doctors before because any illness would go away on its own. Not so much any more in the last few years.

I think I inherited this strange idea of refusing to see doctors from my mother. She never went to see the doctor. She always said, the mind is stronger than the body so if you are determined to make the illness go away, it would. Well, of course, she was talking about a cold. I just generalized it to everything. Plus it’s a bit different, she was poor when she was growing up, and she never had the backing of a company’s medical insurance to see good doctors, so she was haunted by those rough, uncaring doctors at government hospitals. I, on the other hand, had very good doctors and yet I didn’t want to see them.

August, Tim and I went to Australia for a short holiday, and I thought that would refresh me and the headaches would go away. It was just fatigue surely. But the migraines persisted even while we were strolling under sunny blue skies along Darling Harbour. Came back from holiday and my doctor said I should see a brain specialist in HK. What? I didn’t have time and I don’t want to use my holidays. I have trips scheduled for Shanghai and my bosses from HK are coming so I need to be in Beijing. What’s wrong with me? She wasn’t sure so wanted an expert second opinion.

And perhaps she suggested, it was stress causing the migraines. Would I like to see a counselor / psychologist she asked. I said politely, maybe. But in my mind I was thinking, huh? stress? I’m not stressed. And even if I was, I can cope with it. I’m strong remember? And a psychologist? You have gotta be kidding me!!! I am not mentally ill, I am not crazy, I don’t need help.

September came and went – in constant pain. Blatant refusal to acknowledge the migraines even when I was screaming in misery from the pain. Even when we had to call the doctor in to my apartment to see me because I couldn’t manage to walk or get out of the bed, I stubbornly turned a blind eye to searching out the root of the problem.

A morphine shot for the pain since the medicine is not working? the home doctor asked. And I retorted obstinately, “of course not, it’s just a headache.”